“Raising awareness of breast cancer is the least I can do”

When you are in your thirties and living a healthy and active life with small children, cancer diagnosis is not something you expect to receive. Kati Ketola is a breast cancer survivor who wants to share her story to raise awareness of breast cancer, its long-term effects, and the importance of seeking medical advice if you have any symptoms that concern you. 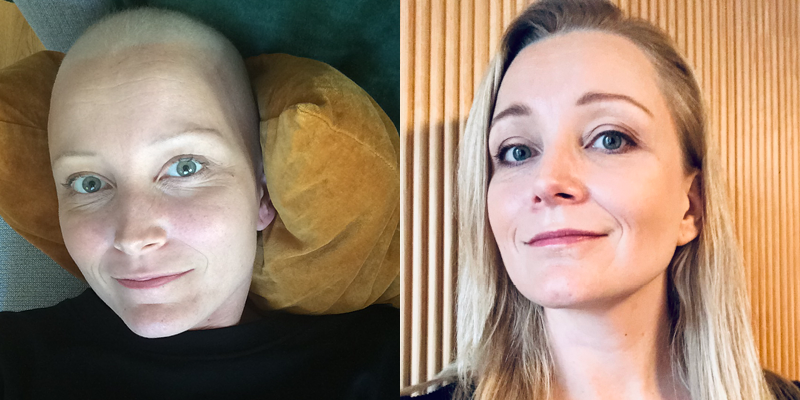 Kati Ketola was 37 years old when she was diagnosed with breast cancer. She had experienced mild pain in her left breast for quite some time, but the possibility of cancer had not even crossed her mind. She was hesitant about going to see a doctor as she thought it would probably be nothing serious. “I had no idea that I should have hurried to see a doctor as soon as I had any symptoms,” she now says. Encouraged by a friend, Kati finally scheduled an appointment.

Kati feels that the doctors did not take her seriously due to her age and because her only symptom was pain in the breast. Pain is not usually a sign of breast cancer – although it can be. The gynecologist Kati went to see thought there was no real need for an ultrasound, but since she already had the appointment booked, Kati decided to go ahead with it anyway. At first, everything seemed to be fine, but once they started to scan the exact area where the pain was, the radiologist came across something that called for more examination.

The next day Kati was scheduled for a mammogram as well as core needle biopsy and fine needle aspiration. The results came a week later, and it was confirmed that she had breast cancer and multiple metastatic tumors in her lymph nodes. “At some level, I already knew that I had cancer, but it was still a huge shock,” she says.

It is typical of Kati to start dealing with a difficult situation in a determined way. The same happened with the cancer diagnosis. After the initial blow, she wanted to find as much information as possible and wanted to know what the next steps are. Kati says she could have easily felt sorry for herself, but she did not want to go down that road. “I could have asked why me, but then again, if not me, who would have been a better target? I couldn’t name anyone else. All I could do was to accept the situation and move on.”

The importance of emotional support

At first, it seemed that Kati’s cancer was caught at an early stage and that the tumor was relatively small. However, it soon became clear that the tumor had invaded into surrounding tissues and that Kati’s cancer type was aggressive. This meant she needed the full range of treatments: mastectomy surgery, chemotherapy, radiation therapy, and eventually hormone therapy.

According to Kati, having to go through heavy treatments with all their side effects, such as hair loss, tiredness, nausea, and muscle and joint pain, was not the worst part of it all. The guilt that emerged from feeling as though she could not protect her two daughters from dreading the death of their mother was much more difficult to handle. In the end, Kati decided to be as open and honest as she possibly could and try to answer all their questions – age-appropriately, of course.

Although Kati feels that the healthcare team helped her manage the physical side effects of treatments, she would have wished for more emotional support. She believes everyone should be automatically offered psychological support from the moment they receive the news of having cancer. “I am eternally grateful to my friends and family for all their help, but not everyone has that kind of support network. When you’re at your weakest, you may not have the strength to seek psychological help if it is not offered to you.”

In addition, Kati recommends taking a trusted friend or relative to every appointment, because it is difficult to digest all the new information. “I had my sister, who is a nurse, with me. She wrote down everything the doctors said and was able to ask questions that I hadn’t even thought of.”

At the moment, Kati’s medical report reads NED, no evidence of cancer, but she avoids using the word ‘cancer-free’. She has regular follow-ups and is committed to hormonal therapy for the foreseeable future. “I have no reason to suspect anything is wrong, but I am also aware that the situation may easily change. In my opinion, being prepared for a relapse is not a synonym for being pessimistic or scared – I just don’t want to be caught off guard again.”

By sharing her own experiences, Kati hopes to spread information about breast cancer particularly in young women and about the importance of breast health awareness. “You often hear people say that breast cancer is easily treatable and that the survival rate is high – nearly 90% of individuals are alive five years after diagnosis and nearly 80% ten years after diagnosis. What is usually not said is that younger women tend to get more aggressive types of breast cancer, which makes early detection literally a matter of life and death.”

Kati also points out that especially among young women, the treatment path for breast cancer is often not as straightforward as getting chemotherapy, losing your hair, getting better, and then moving on with life. “For many women, breast cancer has a variety of long-term effects that may potentially influence the rest of their lives.” That is why she strongly feels that every woman should have a low threshold for seeking a professional opinion, if they have any concerns related to their breast health.

Moreover, Kati wants to emphasize that breast cancer is not a disease that only affects women. Although it is much rarer, breast cancer can occur in men as well. Therefore, it is also advisable for men to pay attention to any lumps or thickening in the breast tissue or changes to the skin covering the breast area.

Being open about her own illness has been an important coping mechanism for Kati. Right from the start, she has been sharing her experiences with her friends and family but also publicly on Twitter. The amount of feedback and support she has received from total strangers has taken her by surprise. “People often compliment me by saying how brave I am to share my story, but if I can raise awareness of breast cancer and encourage everyone to pay attention to their breast health, I feel it’s the least I can do.”